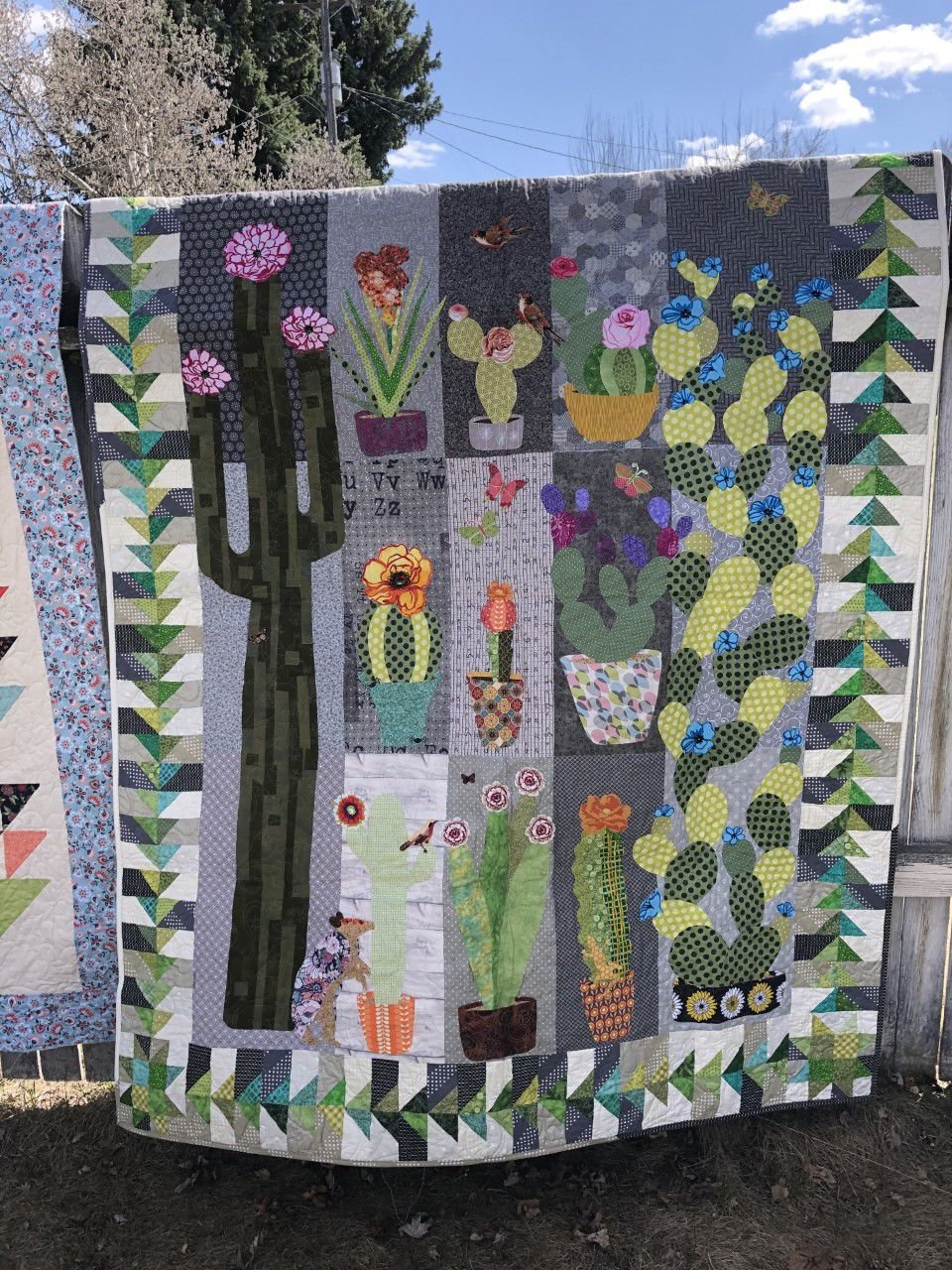 Pictured is an example of one of the quilts Cheyenne Blackburn makes as parts of her quilts business, Wandering Stitches. 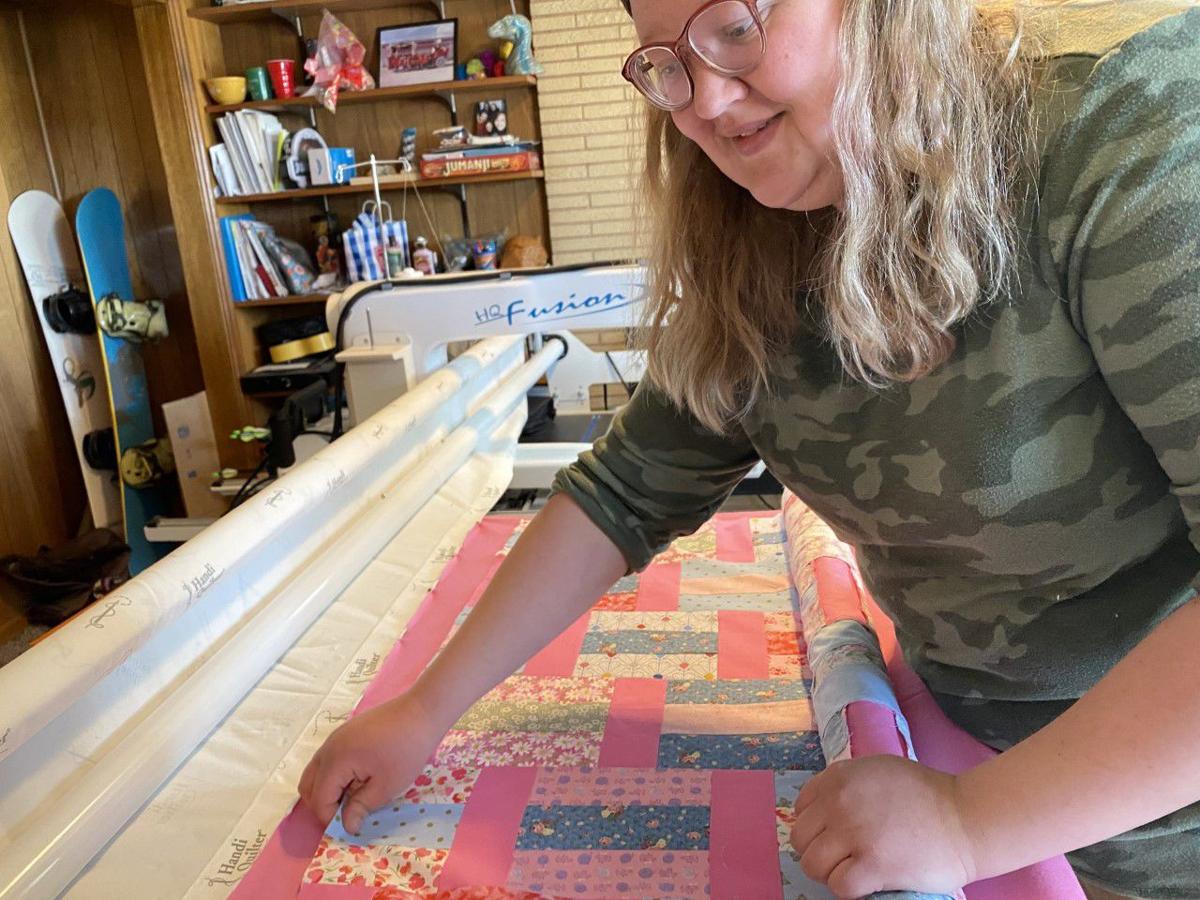 Cheyenne Blackburn of Rexburg works on a quilt for her business, Wandering Stitches.

Pictured is an example of one of the quilts Cheyenne Blackburn makes as parts of her quilts business, Wandering Stitches.

Cheyenne Blackburn of Rexburg works on a quilt for her business, Wandering Stitches.

REXBURG — Cheyenne Blackburn had just returned to her home in Trenton, Missouri, after earning her biology degree from Brigham Young University-Idaho when she was offered a job at a quilting business in the neighboring Hamilton, Missouri.

Just prior to applying at the company, Blackburn had attended a Church of Jesus Christ of Latter-day Saints Relief Society meeting in which they pieced together quilts.

“I just got really hooked. It just seemed like a good fit,” she said of the company. “They’re always hiring. They revived an entire town. They basically own every shop, and all are full of fabric.”

While she was employed there, the company taught Blackburn how to use a long-arm quilting machine.

She had liked living in the Upper Valley where much of her extended family lives, so Blackburn opted to move back to Rexburg. After arriving, she worked for former St. Anthony resident Anne Bright.

“(Bright) was very prominent in the long-arm quilting community,” Blackburn said. “She designs patterns for the long-arm machine. I worked for her quite a while. When she moved, she sold me one of her machines. I liked doing it. I just kept it going.”

At that point, Blackburn started her own long-arm quilting service called Wandering Stitches.

“Quilting is like a puzzle,” Blackburn said. “Piecing a quilt together, that’s attractive to me. I enjoy doing that. I got into piecing, and that led me to quilting.”

Many of Blackburn’s customers come to her via word of mouth. It also helps that she’s a member of the Mountain Valley Quilt Guild where she serves as the assistant secretary. Blackburn also attends area sewing bees and occasionally advertises her sewing services on Facebook.

Quilters from throughout the Upper Valley often request Blackburn’s services.

“I have quite a few clients from Ashton, Rexburg and Island Park,” she said.

Blackburn puts together about 20 quilts a month. She works on the quilts from a large room at home.

“I have a nice quilting room,” she said.

It takes Blackburn anywhere from an hour to 12 hours to finish each quilt.

“It depends on the size and what pattern they like,” she said. “It just depends on how dense they want their pattern to be and how complex — things like that.”

Blackburn’s two grandmothers were “prolific quilters.” Blackburn didn’t quilt with them, but she recalls making pajama pants at one time. She never knitted or crocheted or took any art classes. Yet all that quilting came naturally to her when she finally took it up.

Running a quilting service is quite a leap from biology, Blackburn admits. At one point, she thought about becoming a nurse, but she didn’t enjoy her two semesters of study. Blackburn later switched to biology, and thought she might enjoy working in a dental lab.

Yet, thanks to that one Relief Society meeting where she learned to quilt, a new career she had never imagined was created.

“Things have fallen into place. It’s worked out, and I’ve liked it,” she said.

Blackburn encouraged everyone to be open to doing other things that they had never imagined or ever wanted to do.

“Don’t be afraid to try different things and things that maybe you wouldn’t initially think would be something you would enjoy,” she said. “Do something you like, and something that you’re good at.”

What would her grandmothers think about Blackburn carrying on the family quilting tradition?

“I think they’d think it was fun,” she said.