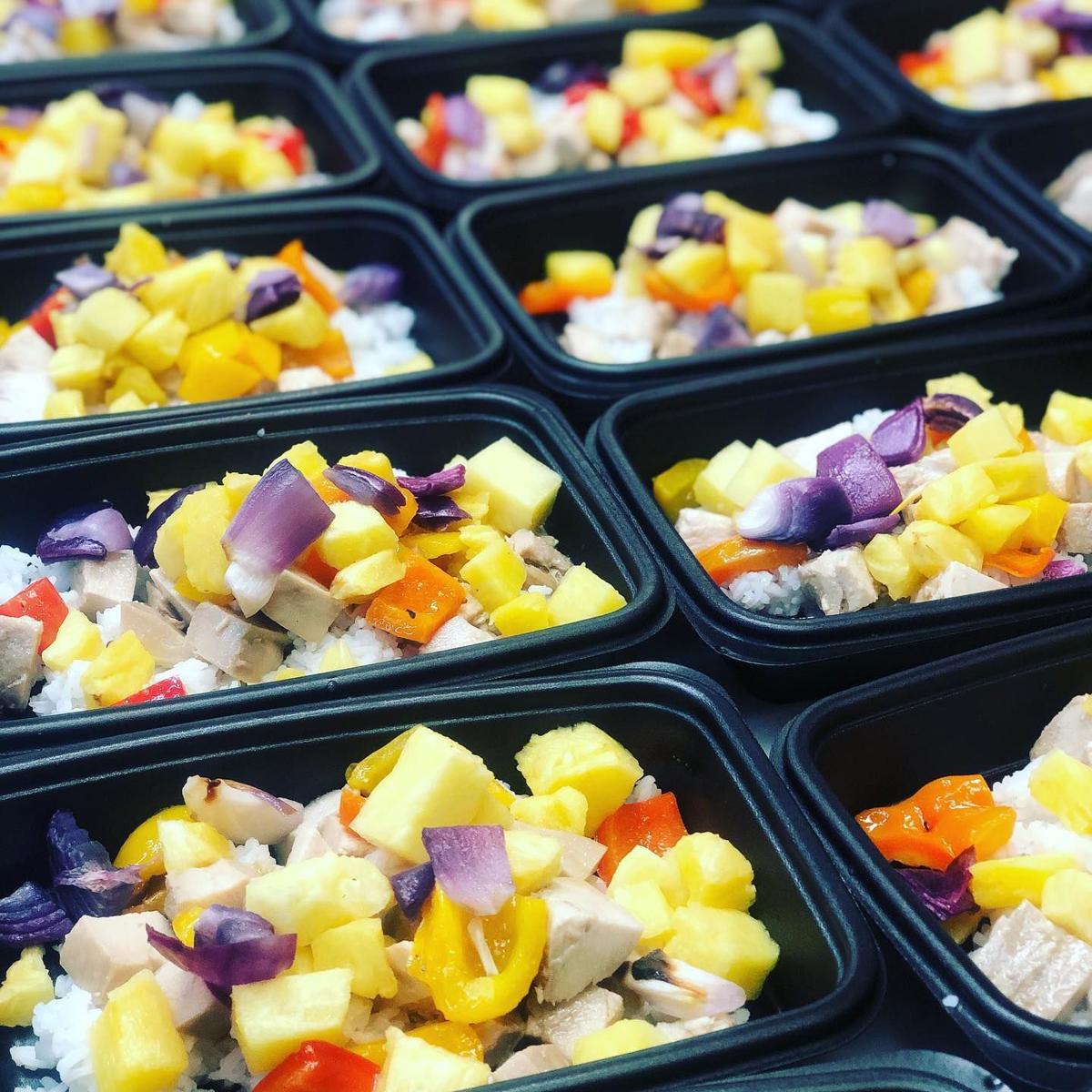 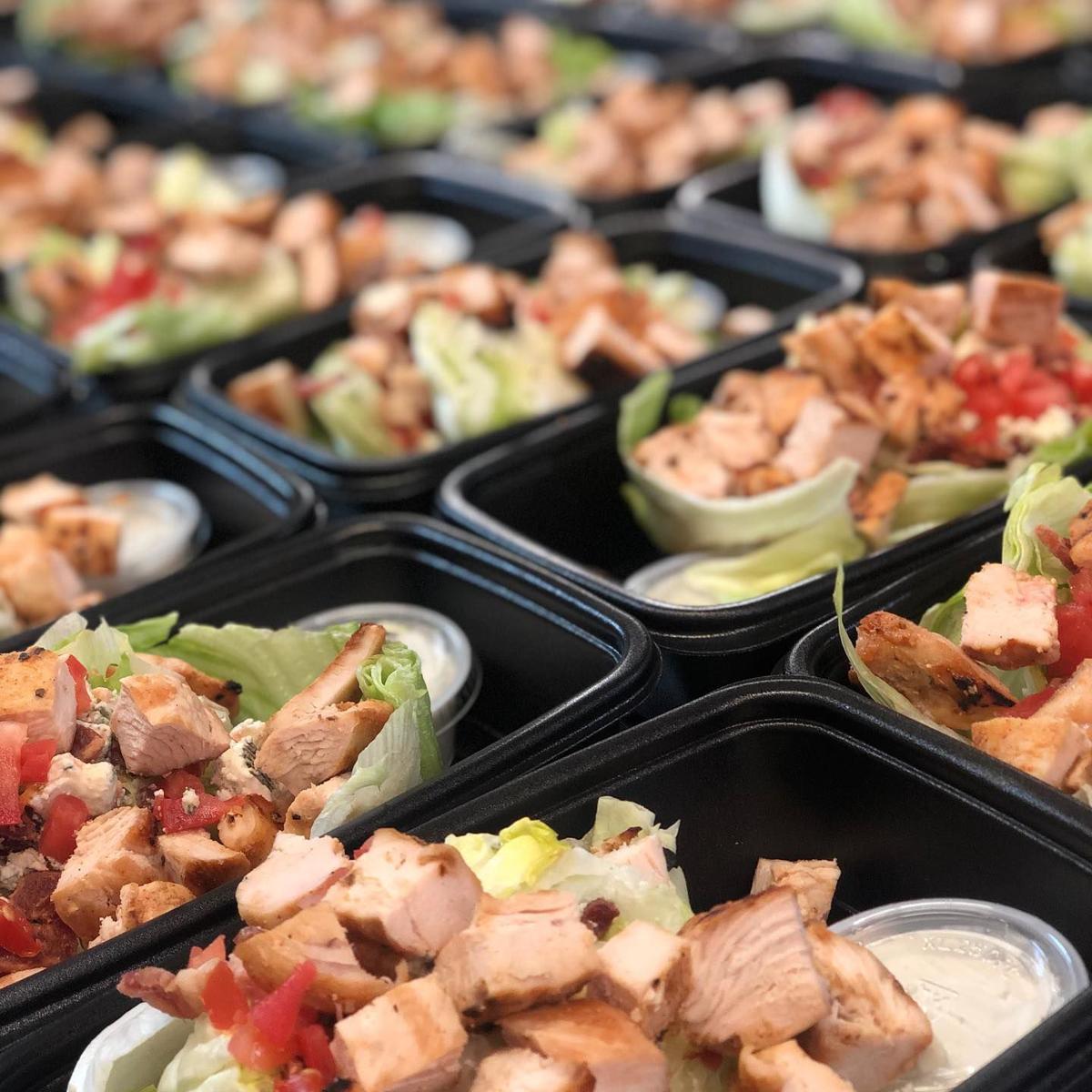 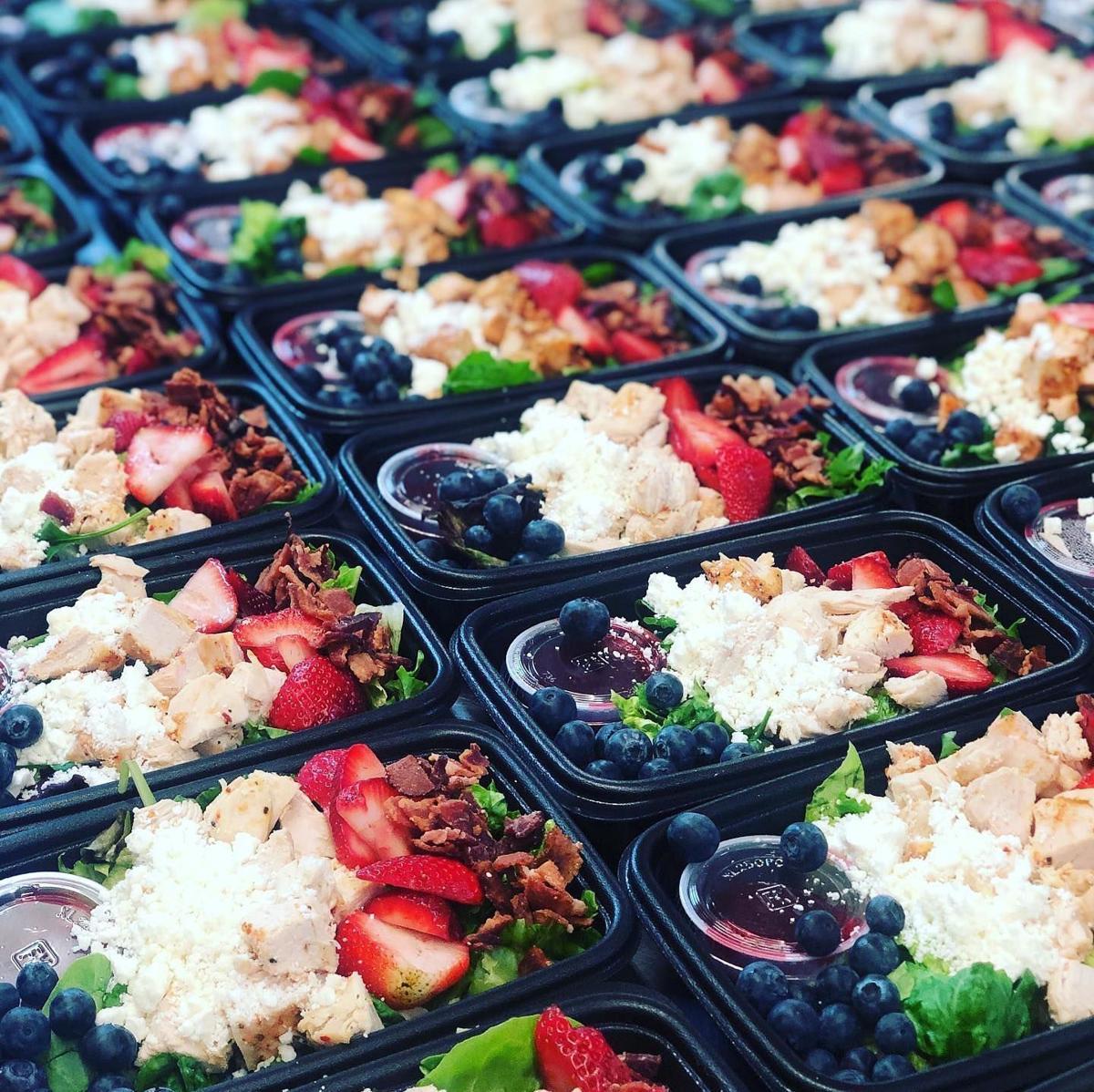 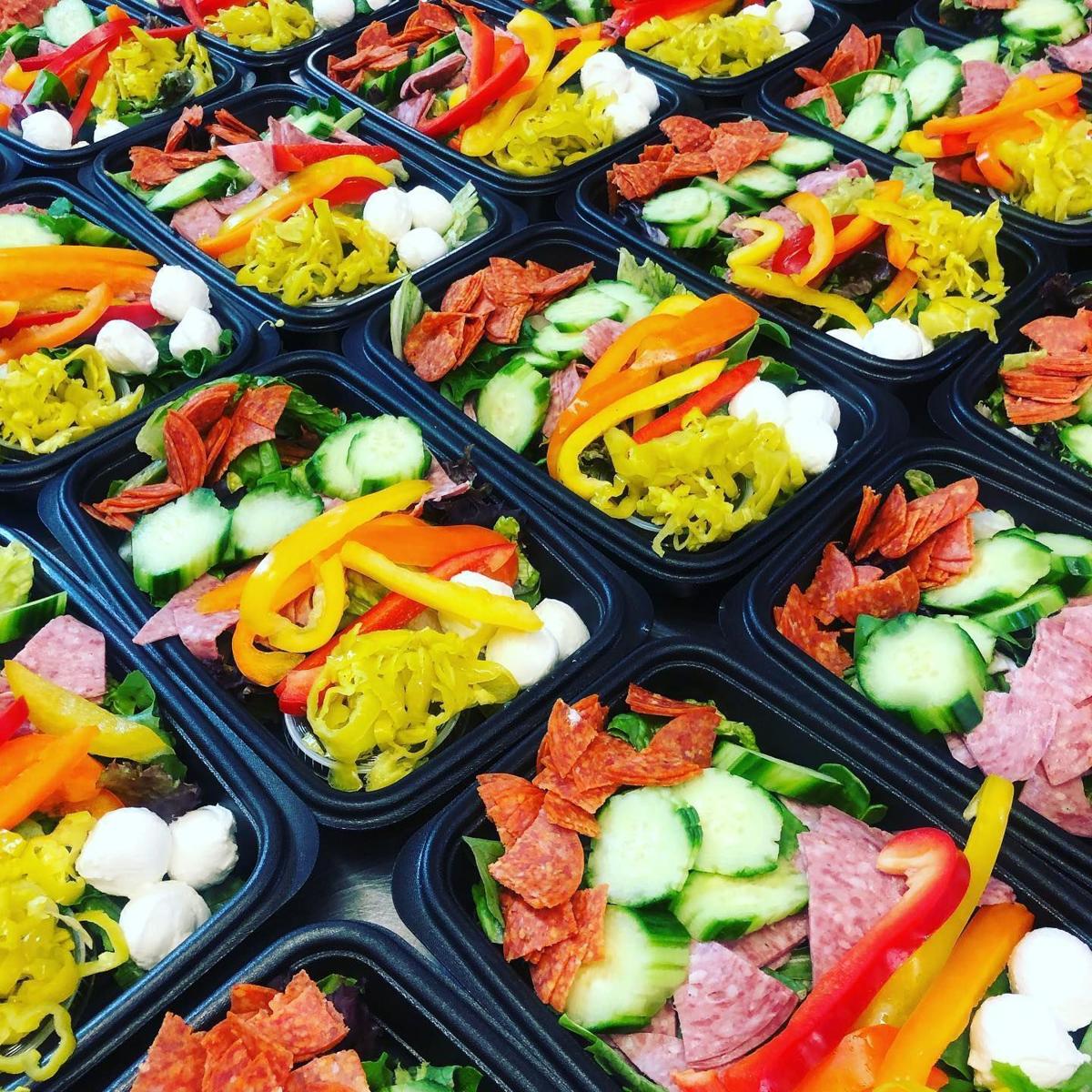 POCATELLO — Several years ago, when Marin Giesbrecht was prepping her own meals for the week, she started also making meals for one of her personal training clients.

“I had a client and she hates to cook,” Marin said. “She wanted to build her house without a kitchen. We were all going to do Whole30 for a month, me and all my clients. She sent a group text message: ‘I’d really like to do this, but would anyone be willing to cook my meals?’ No one said anything. Finally, I was like, ‘I’ll cook yours. I’m going to be doing mine anyway so I’ll cook yours.’"

After the Whole30, which is a 30-day diet challenge, ended, Marin continued to cook food for that client. Then some of her other clients caught on and, "pretty soon there were a bunch of other people at the gym who wanted to do it, too,” Marin said.

The rest is history.

The meal prep company Fresh Prep officially launched in May 2019 and has been steadily growing since then. Marin is now prepping hundreds of meals a week for customers seeking healthy, no-effort options.

Marin and her husband, Chad Giesbrecht, operate their business out of Del Monte Meats in Pocatello, which is owned by Chad’s father.

Chad is the sales manager at Del Monte, so he is able to acquire all the meat for Fresh Prep, as well as quite a lot of the produce used in the meals, which makes it easy to put together between 400 and 600 meals each week, a number Marin says they’d like to grow.

“We’d love to get bigger than that,” Marin said. “We have myself, and (Chad) kind of does the meat portion of things for us. ... And then we have two other employees, so we can definitely handle more."

She added, "We’ve grown slow enough that it hasn’t ever felt overwhelming to us, because at first it was like, ‘OK, how do we make all this work? How do we do this?’ I think we’ve come up with some good systems and have some good employees, so it makes it attainable.”

Currently, Fresh Prep has meals available on Monday and Thursday. People can have the meals delivered to their door with an additional fee, or they can pick them up for no extra cost at several locations in Pocatello, Idaho Falls and Blackfoot.

Eventually, Marin says they’d like to open a storefront devoted to Fresh Prep so they’d have a bigger space to operate out of and people could pick up their meals right from the shop.

“We’re just slowly growing and waiting for the right opportunity,” she said.

Marin said she doesn’t think people are missing out on delicious food by choosing a healthier option through Fresh Prep.

“They’re still amazing meals," she said. "Some people think, ‘Oh, it’s diet food. I don’t want to eat that.’ But we try to make regular recipes into healthy ones, and I really don’t think anybody would ever notice the difference really.”

Fresh Prep has a wide array of menu items, and the options change every week.

“It’s a six-week rotation; however, we add in new stuff all the time,” Marin said. “We know a lot of the favorites that people really like. ... Things like that, that we know that people love, we don’t really take off the menu. We leave them on the rotation. In the wintertime, we’ll take off some of the salads on there and put in soups and vice versa in the summertime.”

Most of the meals are gluten free, and they’re also customizable. If people have food allergies or they just don’t like an ingredient, they can request that item not be included.

“Most meal prep companies won’t do that,” Marin said. “I think that’s what makes us different because we do allow people to customize to some point.”

Fresh Prep also doesn’t require people to have a subscription, which is unique among meal prep companies, Marin said.

Chad said they are considering an optional subscription, though, which will be offered at a slight discount.

Fresh Prep is also partnering with Jriven Fitness, a gym in Pocatello, to provide meal plans in addition to workout plans.

“People who are wanting to lose weight or get in shape or feel better are wanting to know what they need to eat and how to work out,” Marin said. “So even though I am a personal trainer, I felt like it was too much for me to do the food part of it and the workouts. (Jriven) has a great program called Jriven for 30 and it’s an app on your phone and it has the workouts and videos and everything. So people will be able to add that to the subscription if they want, so they’ll know what they need to eat every day and they’ll have the workouts.”

Chad said one of the most surprising things they’ve seen since opening the business is the array of people who order their food.

“At first I thought it would just be all these gym people (who are) just hardcore, go to the gym all the time,” he said. “But really it’s a ton of professionals, busy moms who maybe just need a lunch instead of going to Burger King, and then they have that so they can eat healthy. ... If they’re elderly and it’s just the two of them, it’s a big hassle to cook a whole meal for just two people. They love that. We’ve had some people say, ‘One of the best parts about it is there’s no dishes to do.’”

Marin added, “We have a couple people who we make all their meals. We have people who order two or three a week, but I have one lady, we do custom orders for her. She eats fish and vegetables and she’s single and she lives alone and she loves it. She has a breakfast, lunch and dinner for every day.”

In the future, Fresh Prep may add a snack option or an option for plain cooked meat.

“Some people have wanted us to do bulk protein for them — like a pound of cooked, shredded beef — so that’s eventually something that we are probably going to add on when we have enough time,” Marin said. “That is a need out there. Some people would like to cook their own meals but they would like to have the meat prepped.”

Meals can be picked up on Mondays and Thursdays at the following Pocatello locations: Gold’s Gym, Del Monte Meats, Kulak Crossfit, Pocatello Wellness Clinic, Jriven Fitness and Elevate. There are also two pick-up locations in Idaho Falls — CrossFit AMROCK and Apex Fitness & Performance — and one in Blackfoot at RISE Fitness. For specific pick-up times and to view the weekly menu, visit freshpreppocatello.com.

Fresh Prep also offers delivery. It is $5 per delivery, and your meal will arrive before 8 a.m.

The cost of a meal from Fresh Prep is $5.50 for breakfast and $8 to $12 for dinner. For $2 more, customers can also get an additional half portion. Each meal comes with an ingredient label and calorie count as well as a list of macronutrients.