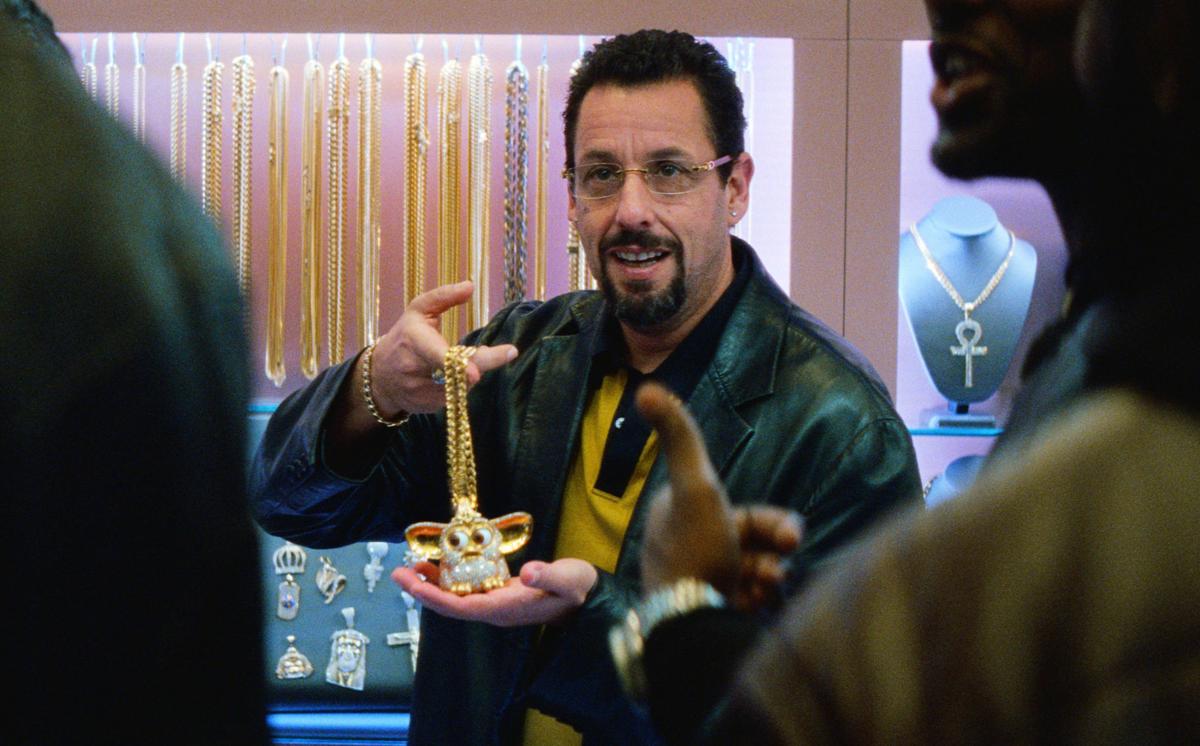 Adam Sandler is shown in a scene from “Uncut Gems.”

Adam Sandler is shown in a scene from “Uncut Gems.”

Adam Sandler’s been playing a game of tug of war with fans and critics for the better part of his career. These two camps are often sharply divided on their standards of good taste. While critics tend to praise Sandler for his risk-taking roles in such films as the Judd Apatow dark comedy “Funny People” or Paul Thomas Anderson’s high-concept drama “Punch Drunk Love,” his fans reliably fill theater seats for low-brow affairs like “Jack and Jill” and “Just Go With It.”

As time has passed, it’s difficult to fault the comedian for sticking with a formula that works and keeping his SNL alumni friends employed as they fade from relevance. That said, it sure is refreshing to see Sandler challenge himself in films such as his latest effort, “Uncut Gems”: a noir-inflected thriller that’s set to a hectic pace.

Sandler stars as a crisis-addicted jeweler dealer named Howard Ratner. Howard’s life is in total disarray as he’s moving heavy amounts of debt from multiple parties throughout the downtown New York City neighborhoods where he works. Dangerous loan sharks are after him, pawn shops are holding pricey items from his shop until he can pay them back, his gambling debts are quickly mounting, and he’s desperately trying to sell a shipment of stolen watches to the unsuspecting merchants who visit his store.

Howard hopes that things will change for the better when he orders in a shipment of uncut opals excavated from a rare Jewish tribe in Africa. With this, he expects to make enough money to settle all of his debts by scoring over a million dollars at a local auction. Plans are disrupted when the jeweler’s liaison to the celebrity world, Demany (LaKeith Stanfield), brings in pro basketball player Kevin Garnett, who insists on borrowing the opals as a good luck charm for his next game. This event throws the protagonist into a series of high-tension escalations that complicate his gambling debts, his extramarital affairs, his safety and the security of his business.

Sandler’s played his fair share of swindlers and dummies, and this character is almost a deconstruction of that comedic portrayal as presented within the context of high-stakes, real-world confrontations. We are witness to a man whose whole life is in a continual state of conflict and upheaval.

Directors Benny and Josh Safdie inform the narrative tensions with their kinetic and nerve-wracking visual language that employs active camera work, quick editing cuts and purposefully muddled sound design in which conversations by the casts are often overlapped and yelled over each other. The effect is that of an out-of-breath, panicked, documentary-like realism that still allows for genre-specific attention to cinematic catharsis.

The supporting players include Julia Fox as Ratner’s workplace mistress, Idina Menzel as his fed-up wife, Eric Bogosian as his mob-connected cousin, and Judd Hirsch as his father. Together they add complexity and richness to the world of Sandler’s unstable character. Though many of the actors featured are recognizable and famous in their own right, they never cheapen for discredit the grit and authenticity of what is a very effective and visceral thriller.

“Uncut Gems” is a brilliant piece of filmmaking, but it’s also a near heart attack to experience. The pace is unrelenting and the situational set-pieces get more intense as the story progresses. Sandler proves with his work here that he can reach a depth beyond pandering to the lowest common denominator and that he’s highly capable of delivering a quality performance when under the right direction. Though his die-hards might watch this only to satiate their hunger until the release of “Grown Ups 3,” they might be lulled into the manic drive of this instant-classic New York crime drama.